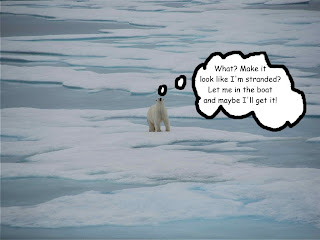 At risk of labouring the point, green awareness has been a largely positive change in western society, and progress in areas such as pollution and habitat preservation is to be welcomed. However, the mushrooming of the Environmental Advocacy Industry is sinister. Since being infiltrated by extremists, the likes of WWF and Greenpeace have moved a million miles from their grassroots origins.

WWF's income in 2010 was $224m in the US alone. Greenpeace's, worldwide, was €524m. Where does it all come from; where does it all go to? Such tsunamis of loot can buy a lot of influence. Put to good use, say to buy up habitat for endangered species, it could make a real difference; deployed on propaganda in perpetuating the Great Carbon Myth it is positively pernicious. This vast PR machine is pressuring governments to fritter away precious resource on renewable energy at a time of growing hardship and poverty for the common man.
The following post is on record, but it's immersed in a sea of information, so I thought I'd highlight it:


Daniel H says:
January 24, 2010 at 8:19 pm
I worked at WWF as a programmer back in my early 20s and I was still sort of naive about global warming and environmentalism in general. The job was located at their Washington, DC headquarters and I was hired to create a new database for their “Climate Savers” program. The idea was to keep better track of the enormous revenue streams that they’d extort from Fortune 500 companies in exchange for not waging organized media campaigns against them (Nike, HP, Dupont, etc).
Their Climate Change Department was staffed by creepy fanatics who would run around screaming about how Bush stole the election and other crazy things about whales and “climate justice”. I was young and didn’t know what to make of it all so I just shrugged it off. Anyway, the head of the Climate Change Department was this freaky woman named Jenifer Morgan. We just called her “the forehead” because of her massive forehead[1]. She threatened to leave DC if Bush was not impeached for war crimes. She kept her promise and got transfered to Bonn, Germany along with her personal assistants.
Last I heard, she no longer works for WWF but continues to fly all around the world on behalf of her new environmentalist NGO.
The WWF headquarters building was a state of the art corporate complex with lots of plants but of course they kept the AC cranked up full blast during the hot DC summer months. In the basement there was a modern gym that employees were encouraged to use so I started using it after work. A lot of these guys who were “campaigners” would blatantly hit on me but I’d just ignore them and keep to myself. Later I stopped going to the gym after I personally witnessed some sort of lurid gay sex going on in the locker room.
I left WWF shortly thereafter.
Anyway, the shocking fanaticism and hypocrisy that I’d witnessed made me curious to learn more about the issue of climate change and what it was all about. That was when I officially became a skeptic.
True story.
I’m not surprised about that sick 9/11 exploitation campaign they ran because many of them were openly anti-American and seemed to think Bush was the Anti-Christ. The young activists were mostly rich white kids whose parents were well connected with DC politics and/or old money families. They grew up in privileged environments completely insulated from the world at large. For some reason they were all obsessed with people like Noam Chomsky. That’s pretty much it.
Whew…It felt good to get that off my chest! :-) Any questions

This posting appeared in the WUWT post http://wattsupwiththat.com/2010/01/24/the-scandal-deepens-ipcc-ar4-riddled-with-non-peer-reviewed-wwf-papers/#comment-298859
Posted by Brent Hargreaves at 14:06