It Comes, It Goes

The Global Warming Hypothesis. A few years ago, having been alarmed - and largely convinced - by Al Gore's film An Inconvenient Truth, I decided to seek confirmation by my own devices. Rather than take the experts' word for it - clever and sincere though they clearly were - I would devise my own tests. Some of these experts were hero-figures such as the great geneticist Steve Jones and the sainted David Attenborough. Surely, I thought, the authors of The Language of the Genes and Life on Earth wouldn't join in with a fallacy; with sodding groupthink. It Steve & Dave say it's so then, I reasoned, so it must jolly well be. But (ah, the curse of having an independent mind) I needed to satisfy myself.

Of the many dimensions of Global Warming, I chose to look at the Earth's icecaps and glaciers - the "cryosphere". There were other aspects (such as sea levels and temperature records) worthy of some forensic digging, but I chose the cryosphere.


The icecaps, it was asserted, were melting. The data upon which this claim was based must, I thought, surely be available. Let's do some digging! But it was easier said than dug. For every argument there was an equal-and-opposite counterargument. Wherever I looked for a dataset which would serve as a proxy for global temperatures - a gold standard - there were caveats, reservations, ifs-and-buts. Confusing and contradictory.


And then I discovered the Great Aletsch Glacier. Well, I didn't ackchooally discover it. Neither did Hanspeter Holzhauser, the Swiss glaciologist. But this fellow knows the Aletsch better than a mother knows her baby. He has studied it from every angle, literally and metaphorically. The techniques used are fascinating; dendrochronology is but one part of HH's toolbox, but that's another story. His studies have yielded the following graph: 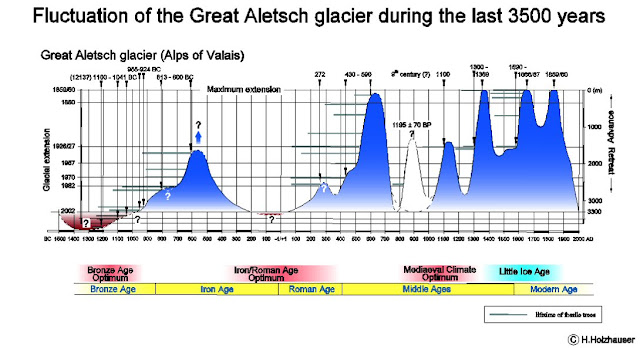 I think you'll see what I see. But first, let's make two assumptions here: (i) Over these timescales, temperature variations in this part of Austria are representative of worldwide variations. (ii) The length of the Aletsch Glacier is directly related to temperature: a cold century produces a bigger glacier tongue than a toasty century. Are these assumptions fair? Not entirely. The Kilamanjaro fiasco indicates that glaciers are not a perfect proxy for current temperature. Warmists loudly attributed Kilamanjaro's reduced icecap to rising temperatures; the decisive factor turned out to be deforestation and consequent reduced precipitation. (Warmists, with chaming asymmetry, trumpet the retreat of glaciers as supporting their case but are conveniently silent on historical lengthening. Perhaps they whisper: "Inconvenient. Strewth!")

Today's Aletsch Glacier is short - shorter than in living memory! Ay, there's the rub: In living memory. We would never say, "Huh, this tree isn't growing: I've been watching it for an hour now and it's the same size!" We would never say, "My bank balance has risen this past week. At this rate I'll be a millionaire in a year!" No, if you're gonna extrapolate you have to apply an appropriate timescale. And, if Mr. Holzhauser's magnificent graph is accurate, a piffling century is not an appropriate timescale. Those who draw conclusions using an inappropriate timescale are either mistaken (and subject to discovering their error of judgment) or dumb (unfortunate) or biased by ideology (religious and political types).

The Aletsch has been coming and going over the centuries. It just so happens that it's been a-going since 1860. Which doesn't neccessarily mean that it'll start a-coming again in the next few years. Even if it continues to recede for another decade or three, any claim that its current rate of recession is unique and unprecedented is not borne out by its 3200-year record of coming and going. The Aletsch says that, far from our planet having entered some neoapocalyptic end-of-days, it's business as usual.

The last ice age ended 11,700 years ago. The 3500-year record shown above is thus one third of the Holocene -  the interglacial period we are now in. Could it be that these 3500 years are atypical? Could it be that the Aletsch is atypical; that other glaciers tell a different story? Well, the answer is no. Here is a paper giving a bigger picture: http://www.ngbe.ch/upload/pdf/Hanspeter%20Holzhauser.pdf
Here's a chart extracted from it:

Note the Aletsch column which includes the 3500-year chart above tipped on its side. This chart gives us a 10,000 year history - almost the entire Holocene period.

The author - our friend Holzhouser - says, "Around the middle of the 19th Century, alpine glaciers advanced to their last maximum extension within the Holocene." Think about that. If anything is worthy of the description unique and unprecedented so beloved of global warming scaremongers it's that 1860 maximum advance of the glaciers. That advance was so alarming that the Catholic church organized processions to pray for the halting of the advancing tongue of ice as it gobbled up precious pastureland. It worked! The priests prayed and the beast retreated. The subsequent retreat is no more alarming than the tide going out; it is entirely within the range of historical variation.

Posted by Brent Hargreaves at 14:58