It's midwinter with Vinersnow covering the country. Heating fuel is expensive. Even so, you want your family to be comfortable. So what do you do? You set the timer to switch on the heating at getting-up time, and to switch it off at departure time when people go off to work and school.

But the family isn't happy. They complain that they go from warm beds to frosty bathrooms, and then leave the house when the place has finally warmed up. What do you do? You advance the heating timer by an hour. Or maybe, in a smaller place, by a half hour.

This time lag is known to Control Engineers as transient response. The principles behind the steering of a guided missile, the tuning of a vehicle suspension and the adaptation of a thermal system are one and the same. In each case, a certain mass (or thermal capacity) is acted on by a certain force (or thermal power) and accelerates (or undergoes a rate of temperature change) to a terminal velocity (equilibrium temperature) at which force and drag (drivers and losses) balance. The maths describing resonance can be darn complicated but the differential equations - precise and quantified - do correspond to common sense and to our intuitive sense of how the physical world works.

I have a conjecture (called SORT for short) that the Earth has just such a transient response, and that changes in solar activity are NOT immediately reflected in global temperatures but after a timelag. Or rather two timelags. They are quantifiable: 99 years and 152 years.

I use the expression conjecture as opposed to hypothesis or theory for the following reason: The vile philosophy of Postmodern Science has lowered what businesssmen know as 'barriers to entry': the things which make it hard for a new player to start up in competition and take a chunk of your market. In many sciences the bar has been lowered, with the result that half-baked 'theories' are entering the corpus. Raddled by cop-out language such as "suggests that" and "may indicate" and "an apparent correlation", wishy-washy notions are announced and taken seriously rather than being howled down as premature enunciation. This is corrupt with a small 'c'; much of this pseudoscientific trash is announced in press releases which are ill-disguised pitches for money: "Subject to the availability of funding, this promising work may lead to important advances."

My Solar Oceanic Response Timelag conjecture is what it says on the tin: a conjecture. With luck it will develop into a hypothesis which will either be refuted (ah, well, so be it) or confirmed, in which case it will be promoted to a theory. If it does manage to reach the happy status of a theory, SORT may still be demolished by subsequent contrary evidence. All science worthy of the name is only as good as its last game. Not for us the dogmatic twaddlespeak of "the science is settled" - a corrupt notion which religion has bequeathed to its fellow-traveller, the Cult of Global Warmery.

Do you see any correlation between them? No, neither do I. How about these?

See what I've done? I've shifted the oscillations in the Atlantic leftwards - and 99 years into the past. Ditto for the pacific, but by 152. Well, I for one can see a match. We're surely all agreed that correlation is not causation, but correlation is the scent which leads the pig to the truffles - it's just the start of a hunt. If we think these matches are more than pure fluke, the hard work lies in the future: to explain the mechanisms within the laws of physics and, consequently, generate near-term forecasts. Result: death or glory, not the undead zombiedom of the Hockey Team with its limitless store of excuses for the pesky planet's refusal to warm up since 1998.

So the conjecture is this:
(a) Solar activity - of which one symptom is sunspots - is delivering a variable power to the Earth on a multidecadal scale. This variation is significantly greater than the modest variation in TSI being measured at present, and this variation may (I'm allowed that word - may - because it's only a conjecture!) be due to the Svensmark hypothesis or large variations in the mix of specific power (W/M^2) at different wavelengths.
(b) The transient response of the Atlantic is 99 years, and surface temperature measurements lag the energy arrivals due to its thermal mass, its vertical mixing and its currents.
(c) The Pacific's transient response is a greater 152 years due, of course, to its greater size.
(d) Atmospheric temperatures - or rather their fluctuations - are largely governed by fluctuations in sea surface temperatures. El Nino / La Nina is one - an important one, but only one - agent of these heat transfers between sea and air.

I see two problems with this conjecture: (i) The most authoritative measure of decadal atmospheric temperatures, i.e., the University of Alabama at Huntsville MSU-LT series, matches quite well the AMO but, given the phase difference between Atlantic and Pacific (not to mention the other oceans), energy exchanges between atmosphere and all the oceans must be considered. (ii) The last decade of the AMO is rather warmer than the solar activity of the Edwardian decade should have caused. If explaining away such anomalies entails many contortions and hedging (e.g., volcanic aerosols and (pah!) greenhouse gases) it reduces the conjecture's attractiveness.

On the positive side, these three curves together suggest an imminent cooling spell of decades. The conjecture is thus falsifiable - a key ingredient of scientific integrity - and if temperatures exceed the 1998 peak at any time within the coming decades then this SORT conjecture is toast.

If SORT is real, we're in for some pretty chilly weather, but our grandchildren can look forward to barbecue summers and mild winters in c2060, when the 1960 sunspot peak pops back to say hello again.

Update 22 March 2012: Holzer and Primeau 2006 Paper
So why would a 'hot sun' in one century cause a hot ocean in a later one? Surely, one might say, the world would heat in the here-and-now rather than produce some later echo. Well, imagine a car's wheels going fast over a speed bump. Your head bumps the roof a few feet later on. Depending on your dampers, and how heavily loaded you are, the car bounces for a greater or shorter time after that "step change" as it's called in Control Engineering. Here are transient responses at different levels of damping:

Now, we're all familiar with the "Great Ocean Conveyor", the curly wurly current which spans the globe. It was discovered as recently as 1991. The Cult of Global Warming has been spouting the nonsensical mantra, "the science is settled" since - what? - 1990? But we digress. 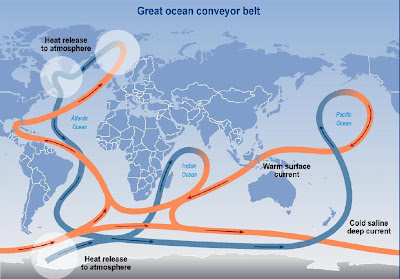 Now here's a little quiz question for you. Imagine a message in a bottle: how long would it take to get from, say, Tahiti to Iceland? A year, you might guess. Or maybe five or ten? You may well be right provided that that bottle stays "in the fast lane" and doesn't waste time along the way, dawdling in an eddy. It might even spend a few years in the Sargasso Sea. When you think about it, the conveyor metaphor was surely never intended to be taken literally - as a fixed-width flow moving at uniform speed. And here's another point: we're thinking about this in two dimensions. What's the speed of that current half way down to the seabed? Surely slower. What's its speed at even greater depth?

Of course there's no simple - or rather single - answer to the residence time question: it's a statistical distribution.

This paper makes a valiant attempt to answer the question: Holzer and Primeau 2006. They would have it that waters sinking in the N Atlantic resurface in the Pacific centuries later. As anyone with an inkling of fluid mechanics would intuit, there's a wide distribution of 'residence time', the peak being 1180 years, but they illustrate one fast-lane at 440 years and one slow-lane at 3130. It's mostly written in good English, with the occasional specialist term such as isopcyncal.

It's only a model. But there is some mention of being consistent with C14 dating of organic matter which surfaces.  What's important here is the order of magnitude of the residence time. If vast volumes of water are being taken from the surface to a multi-century hiding place, and then resurfacing, the notion of a 99- or 152-year SORT doesn't look crazy.

There's also evidence that fluctuations in atmospheric CO2 lags behind global temperatures by 900 years. If we can prove that the outgassing of the oceans is a 900-year transient response, then all the hysteria surrounding CO2 emissions will evaporate.

What data would we need to flesh out this conjecture? Watch this space. Better still, dear reader, contribute your thoughts and any evidence you may have encountered. What papers are out there giving a mathematical treatment of the oceans' CO2 budget over century timescales?