As Bonnie Tyler might have sung, "We Need a Herschel".

In 1801 the genius astronomer William Herschel attempted to draw a correlation between the number of sunspots and the price of grain in London. In that era of data-paucity, it is staggering that he made such a leap with no prospect of establishing a causal relationship. And yet he did just that. Combining his well-digested knowledge of the universe with profound intuition, he bequeathed us this promising gem of an idea. To our shame we, posterity, have done bugger all with it for two centuries. The sun may influence climate and hence agriculture? Now THERE's an idea!

What a contrast with the army of intellectual pygmies of today in the Global Warming Industry! There are legions of academics with unprecedented access to data; bathed in data; swamped by data; inundated by data. Perhaps this very sensory overload explains why - as Churchill might've said - so much is paid to so many for so few scientific breakthroughs. The vast majority of scientists - at least of those who have a media presence - peddle the outrageous myth of Global Warming. With a few honourable exceptions, the majority view is that the pernicious gas carbon dioxide is heating up the Earth. When questioned as to why the effect of Thermageddon is so subtle as to be imperceptible they trot out the standard answer: "Hah! Give it a century and you'll see how right we are!" As sea levels change imperceptibly, the great threat is now said to be a rise of "of the order of a metre per century". This suggests that the timescale for concern is now - in the plural - centuries. Ah! It's in the 22nd and 23rd centuries that the great flood threatens! In one of Chaucer's stories a "learned" student deceived his ignorant landlord into spending the night in a wooden barrel in order to survive the impending flood. Said student used the night to have his wicked way with the landlord's wife. Those who peddle today's apocalypse myth is no less deceitful.

Now, correlation is not causality. But here's a promising correlation between climate and solar activity: 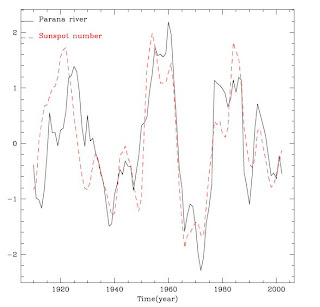 When the Parana River flows at its mightiest, solar activity is at its peak. Does one cause the other? Does some other factor cause both? Or is this empty coincidence? If there truly is a link, what, precisely is the mechanism? Henrik Svensmark's hypothesis - that solar activity modulates galactic cosmic ray (GCR) penetration of the atmosphere and consequently cloud seeding - fits the bill nicely. The CERN laboratory at Geneva confirmed the GCR/cloud causal link in summer 2011. Bless 'em.

Until the Global Warming Gravy Train so badly corrupted science, conjectures remained mere conjectures until precise mechanisms of causality were described, and predictions were confirmed by observation, and repeatability was established. The wishy-washy woolly scoundrels dining out on the Great Global Warming Hoax keep their massive scam rolling by issuing vague unfalsifiable predictions...  and then have the barefaced audacity to whine about the need for extra "funding" to spin it out further. Shame on them!

Stop Press: The Maldives have gone under! Cancel the new airport: it's too late. 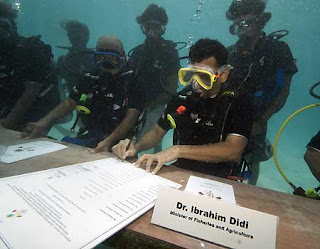