Usually, an acronym is a newly fabricated word constructed from the first letters of a phrase, GIGO being one example.

I'm trying to create its opposite from the letters VINER. Dr. David Viner, formerly of Norwich Poly (sorry, that should read "...of that revered seat of learning the University of East Anglia") has achieved immortality by his keynote declaration in 2000 that within a few years winter snowfall will become "a very rare and exciting event" and that, consequently, "children just aren't going to know what snow is."

Many a man would be embarrassed at having made such an assertation, and would salvage some vestige of credibility by retracting. Not so Dr. Viner, whose career in the GWI has flourished. Put yourself in the place of Dave's poor kids. "Daddy, what's that fluffy white stuff covering the back garden?" "Get AWAY from the windows, you little bastard! I've TOLD YOU BEFORE that we leave the curtains closed from October to March!" 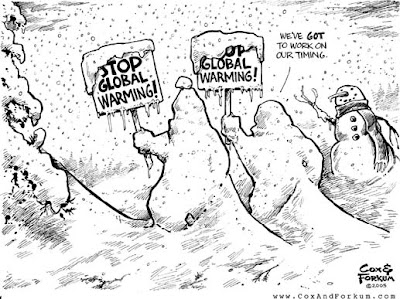 So, what might a VINER be? What might the V stand for?
Posted by Brent Hargreaves at 15:45