The CET is the longest series of continuous temperature measurements that we have. It dates back to 1659!

This is gold dust! How better to assess the merits of the claim that the Global Warming of 1975 to 1998 was unique and unprecedented, and can be extrapolated upwards until we all roast to death in Thermageddon?

If you have the stamina for it, take a look at this comprehensive account of how the wicked Michael Mann has tried (and transparently failed) to subvert this data to support his religious convictions of a warming world:

It appeared on Judith Curry's Climate Etc website without, it must be said, her full endorsement.

The author, Tony Brown, compares and contrasts the work of the late Hubert Lamb and the, er, still-with-us Michael Mann.

My favourite quotes are: So we have two competing climate history stories-one developed over a lifetime of academic research mostly before the computer era, and the other derived from a scientist using modern statistical techniques and the extensive use of novel proxies interpreted in a highly sophisticated manner using computers,

Lamb’s work showed substantially greater climate variability, with a distinct and warm MWP and two eras of the LIA-the second much more severe than the first, and a steadily climbing temperature from around 1690 to the present date , albeit with numerous statistically meaningful reverses and advances. Coupled with the long lived CET instrumental records, this appears to show that if the Mann reconstruction is correct, the British climate has at times varied substantially from that of the remainder of the Northern Hemisphere for 400 years or so. 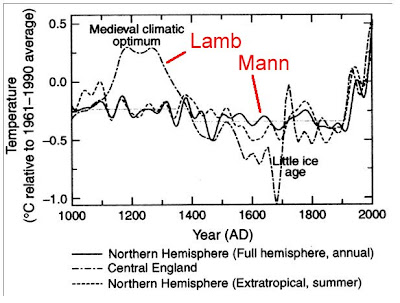 You be the judge: Which of these two giants gives us the most accurate portrayal of the past? Was the climate of past centuries fixed and stable, so that its recent variability can be called "Climate Change"? Or has climate always jolly well changed, in which case the CC label is misleading?

Imagine the day when a bunch of bent scientists issue a press release declaring Childhood Relentless Aquision of Pounds Syndrome. Such a media-savvy label is subtly planting the fallacy in people's minds that children stay the same size over the years. It's CRAP. So why do we not laugh these climatological apocalyptic fraudsters out of town for harking back to some golden age when climate didn't bleedin' well change?!

Posted by Brent Hargreaves at 15:51