The excellent Matt Ridley of Wired Magazine has a beautiful turn of phrase. Here, he explains in a few short words the global warming craziness causing such a kerfuffle: 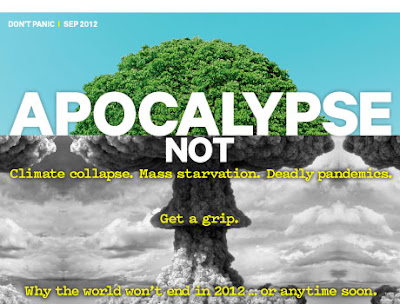 Matt writes: Over the past half century, none of our threatened eco-pocalypses have played out as predicted. Some came partly true; some were averted by action; some were wholly chimerical. This raises a question that many find discomforting: With a track record like this, why should people accept the cataclysmic claims now being made about climate change? After all, 2012 marks the apocalyptic deadline of not just the Mayans but also a prominent figure in our own time: Rajendra Pachauri, head of the Intergovernmental Panel on Climate Change, who said in 2007 that “if there’s no action before 2012, that’s too late … This is the defining moment.”

Read his words of wisdom at http://www.wired.com/wiredscience/2012/08/ff_apocalypsenot/all

How refreshing to have, in Matt, a cool collected counterweight to global warming alarmists and their shrill voices.

Posted by Brent Hargreaves at 14:59