Please forgive the attention-grabbing headline. The intention is to encapsulate in four short words a possible breakthrough.

Here's the thing: Variations in solar irradiance of the Earth affect atmospheric temperatures after a 99 year timelag. Instead of "sun heats atmosphere, end of story", the process is: sun heats oceans, oceans store heat, oceans later release heat to atmosphere. The greater the body of water the longer the timelag, and of course oceans do not live in isolation: there are ocean-to-ocean exchanges. The Solar Oceanic Response Timelag - SORT for short - is quantified at 152 years for the Pacific and shorter for smaller bodies, but the Atlantic Ocean with a timelag of 99 years is a close match for the entire ocean system. At risk of labouring the point, the Atlantic doesn't govern climate but it is the perfect proxy for the entirety of the oceans which absorb heat in one year and yield it to atmosphere 99 years later.

Let's compare the satellite record of the lower atmosphere with Atlantic surface temps: 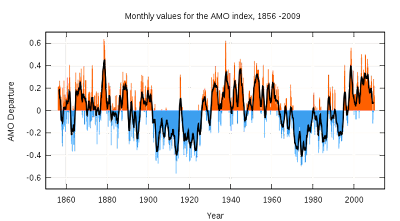 The satellite record only goes back as far as 1979 but it's the gold standard set by the University of Alabama at Huntsville. Terrestrial measurements are subject to instrumental error and - yeek! - manipulation. (Don't get me started!) The AMO (Altlantic Multidecadal Oscillation) data comes from NOAA.

Now, let's align the timescales. Please forgive the lack of crispness in the images below... I'm working on it. But the message is the point, not the hamfisted presentation: 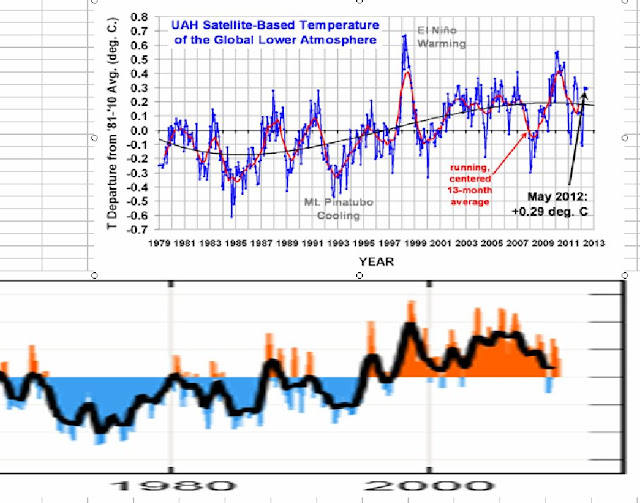 I like to think that future generations will look back on the hysteria of the past few decades and chuckle at our naivete in thinking that the useful trace gas of CO2 was about to fry us; CO2 was causing runaway global warming. I hope that future generations will find unremarkable the truism that the sun warms the sea and the sea warms the air, and not get hung up on apocalypse myths.

One final thought: The reader may have seen temperature graphs referring to volcanic eruptions: there may be an arrow pointing to a dip, with a caption "Mt. Pinatubo eruption". It has always bugged me that such there's an implicit assumption here: Without that eruption the graph would've been flat.  The above pair of graphs would seem to contradict the notion that recent volcanos have had a measurable effect.
Posted by Brent Hargreaves at 18:53